First I will share “la luna piena” the full moon out my window Saturday evening. I looked out my bedroom window and this is what I saw: 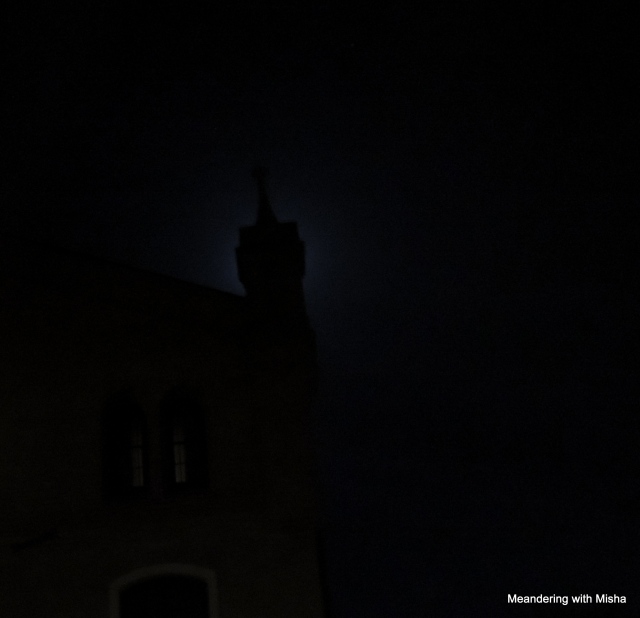 Just a glow behind that architectural feature at the Hilton. Oh, wait….let me check the living room window….ah, there it is. 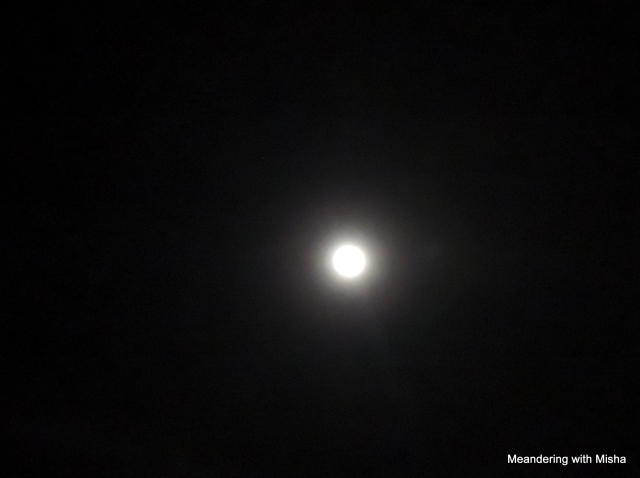 Now on to some delightful chance encounters among other things.  I was headed to the Accademia area to watch a parade of boats go by in honor of Festa della donna. My friend Karen and the Pink Lionesses were rowing their dragon boat along with other rowers in honor of the day (which was actually Wednesday March 8…International Women’s Day).

I left my apartment at 8:40 am headed for the Sacca Fisola vaporetto. Just after I crossed the bridge who did I see? Would you believe Kevin Costner? Be still my heart. I wonder if he walks here every day at this time. I may just have to stalk him. Sorry, I was so excited that I didn’t get a picture.

Oh, you think I mean Kevin Costner the actor? No, for me much better…this “Keveen” as he is called in Italian is “un bello gatto bianco”, a handsome white cat, on a leash, walking in a very stately manner in front of the gentleman at the other end of the leash. Kevin paused for my admiration. I did not know his name at the time and his owner didn’t really speak English but I struggled along in a little broken Italian and got to run my fingers through Kevin’s very silky fur and he even submitted to chin scratching. It was my first cat sighting/cat fix of the trip. The day was off to a good start. At nine am I was at the vaporetto waiting on the No. 2 just in time to hear the church bells. It always brings joy to my soul. And the vaporetto pulled up just as the bells ended. I was just going across to the Zattere with plans to walk the way I was familiar with to the Accademia. 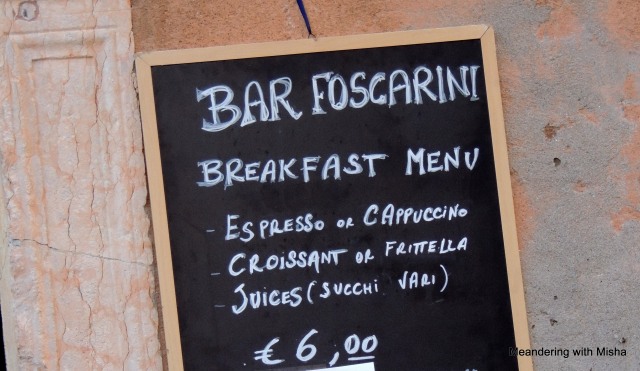 A little breakfast while I wait for my friend from Latvia and a prime viewing seat for the parade. 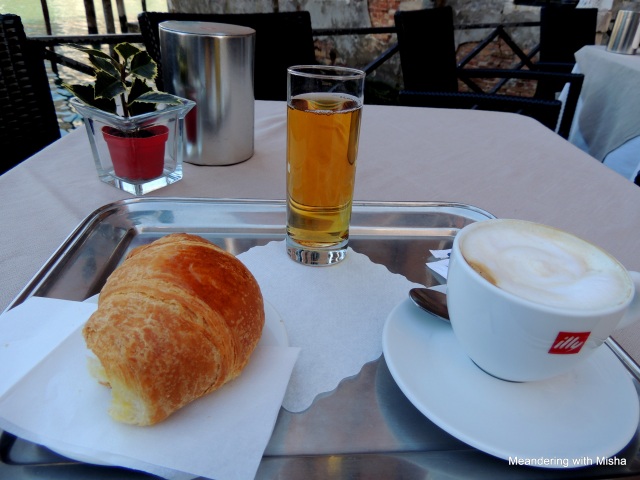 And I was to discover….gondolas park here. 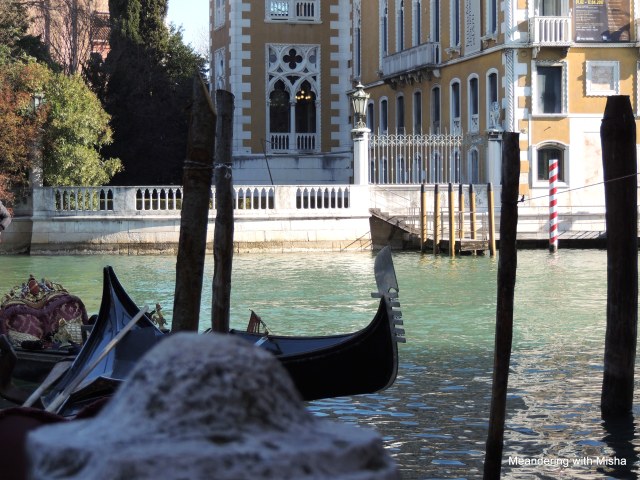 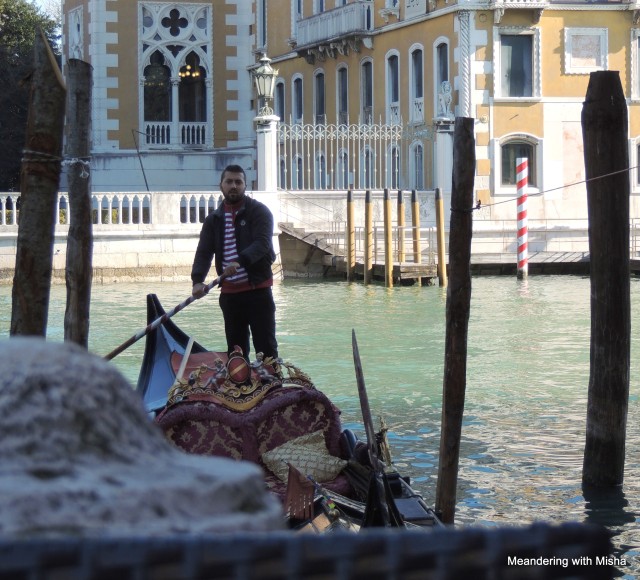 I’m pretty sure that look is saying please don’t take my picture…unless you are going to pay me for a ride.

Then the fun began. Four young Asian ladies engaged his services and he had to help them climb over the first gondola into his. I wish I had a video with sound as they squealed when the boats rocked and they were sure they were going into the water. If you have ever heard pre teen girls at a slumber party (even in the movies) you have heard that sound. These ladies had not grown out of it. 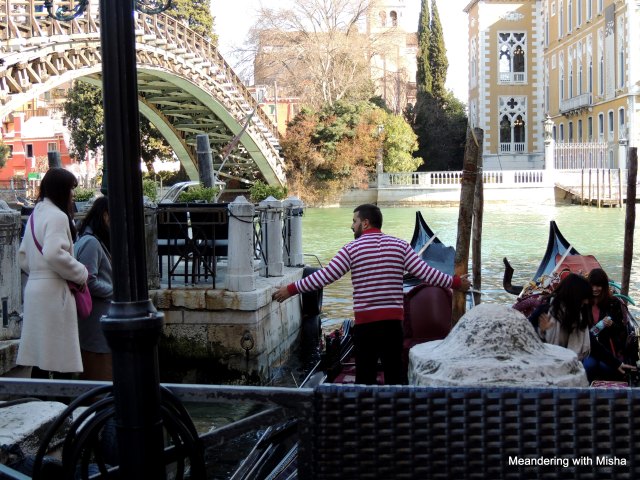 When their ride was complete (30 minutes, 80 Euro for the boat, not each is the official tariff) he kindly posed for individual pictures with his arm around each one of them. I think they each got their 20 Euros worth.

Bar Foscarini is in the perfect location at the foot of the Accademia Bridge. 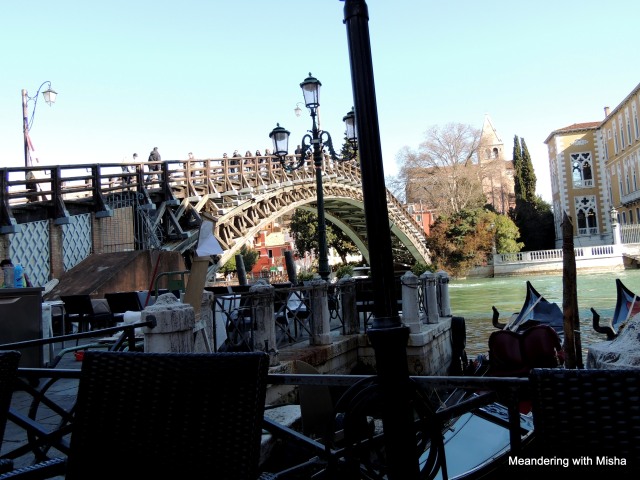 In fact, although she is not in this picture I was able to spot my Latvian friend as she crested the bridge. Shortly after she arrived rowers started under the bridge….they had come from San Marcuola and were rowing to San Marco. Some of the boats were decorated with mimosa blossoms, the flower of Festa della donna. 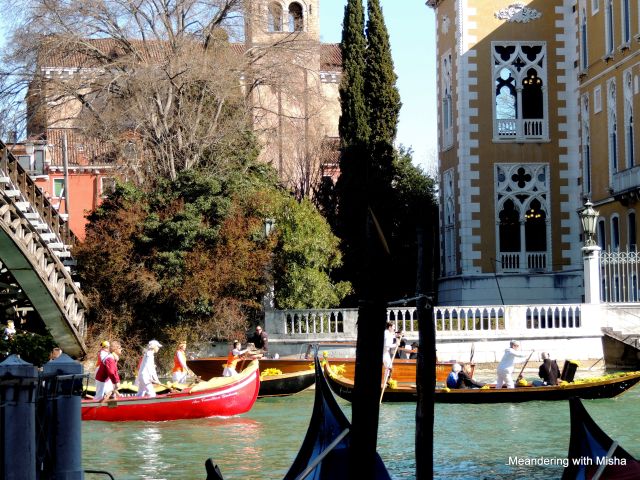 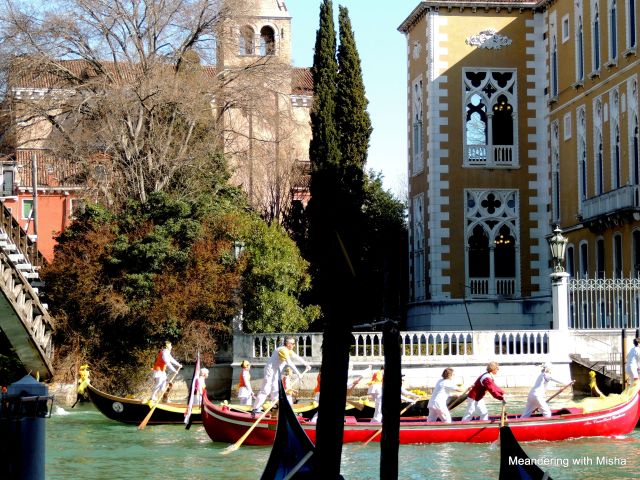 See the pink to the left  of the picture on the front of the boat….that’s the Lionesses dragon boat and I put down my camera to wave and call out “Ciao, Karen” and missed getting a good shot. But my friend got an excellent shot of Karen waving at us. 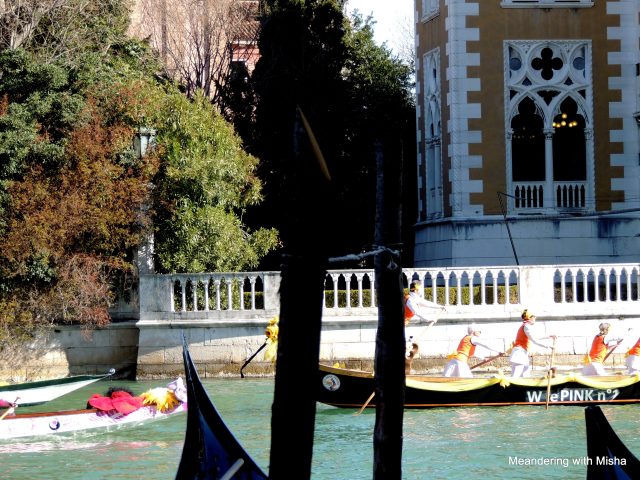 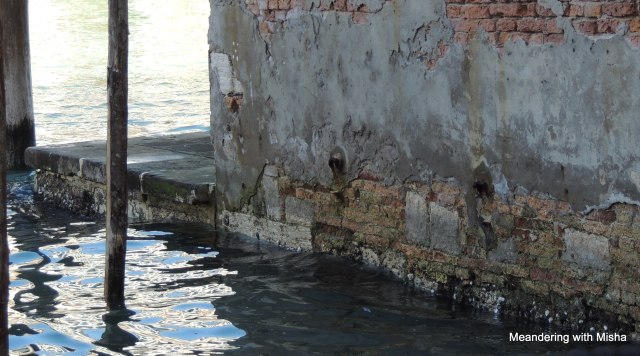 We sat for a while longer and decided to take the vaporetto which was just around the end of the bridge to the Arsenale stop for a wander through my old neighborhood.

These signs were spotted in a window. Being cat lovers we had to stop. 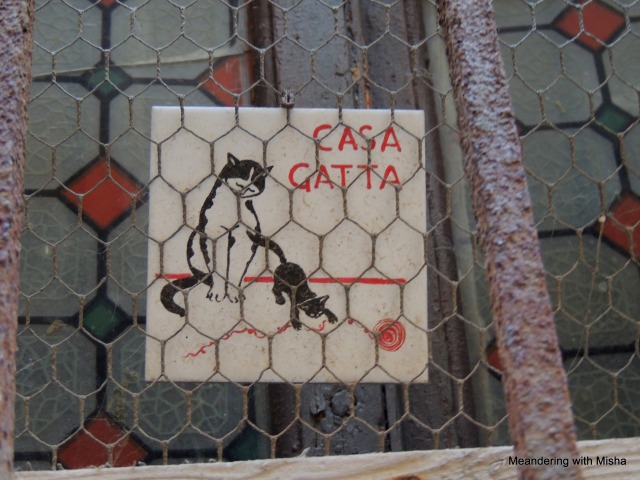 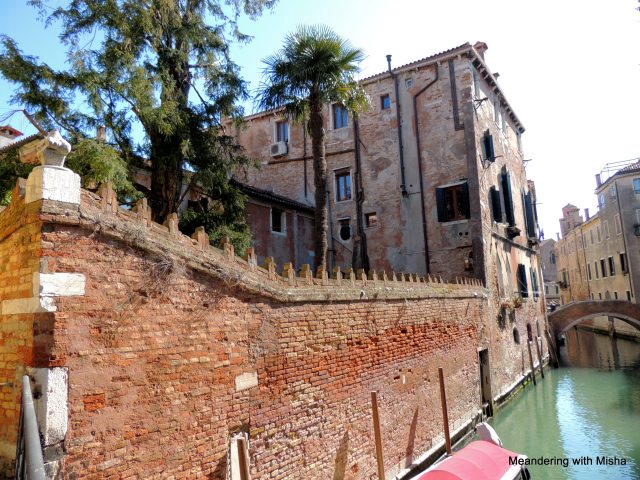 The windows (the ones just above the water) look like no one is staying in my former apartment. It was at least 11:am and the shutters on the bedroom….the two windows after the drain pipe …are closed. His loss, I tried to rent it. 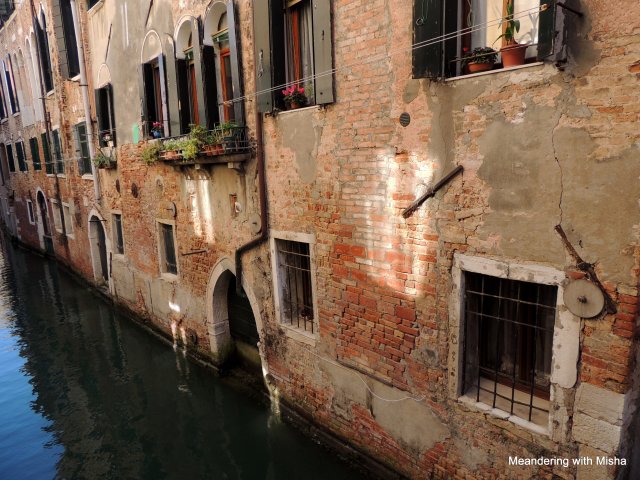 The view from the Ponti dei Scudi….I hope those are strong clothespins. 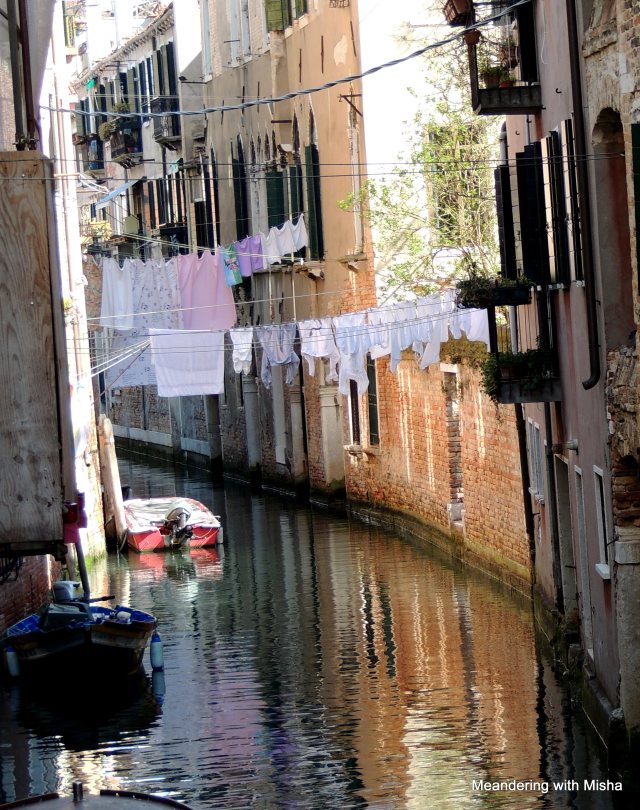 I like this graffiti! A happy lion of Venice. The winged lion of St. Mark. 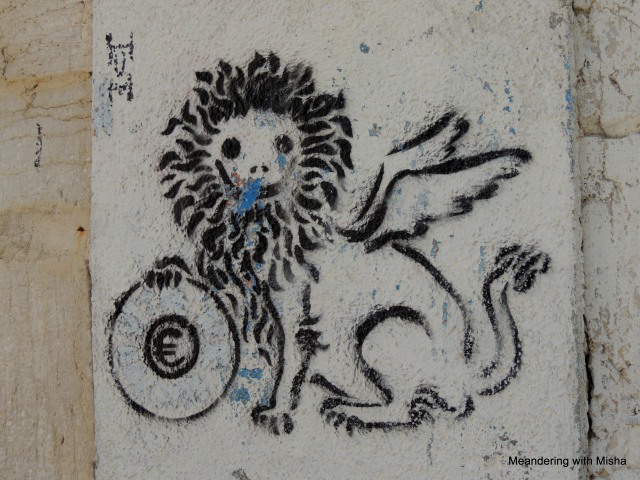 We have wandered into the campo by San Francesco della Vigna. If you want more info about the church and the art it contains: 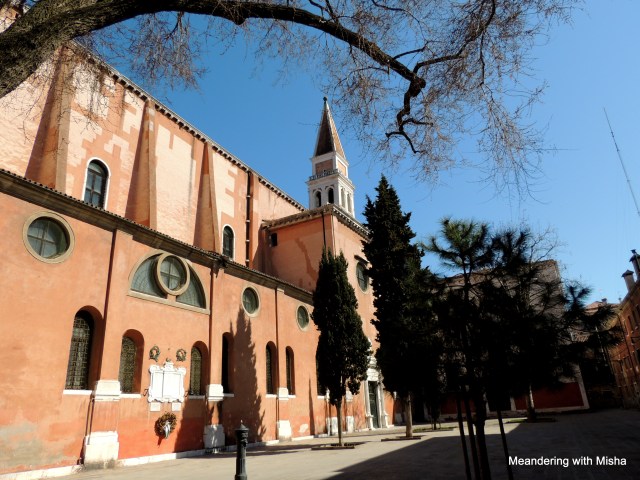 Now someone knows how to pose for a picture. His owner kindly stepped aside to take his own legs out of the picture. This one is for you, Keith. 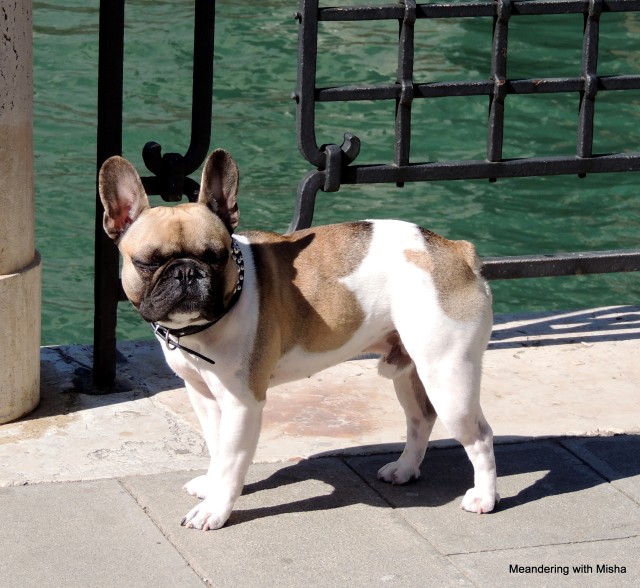 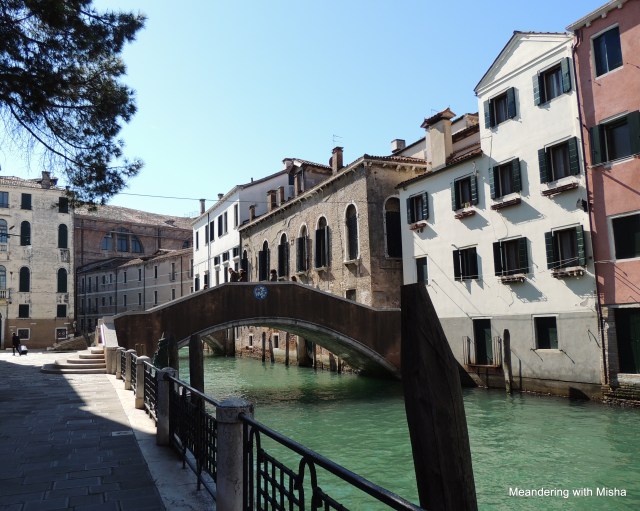 And we have wandered and found a bench in the sun near the church of Santi Giovanni e Paolo. 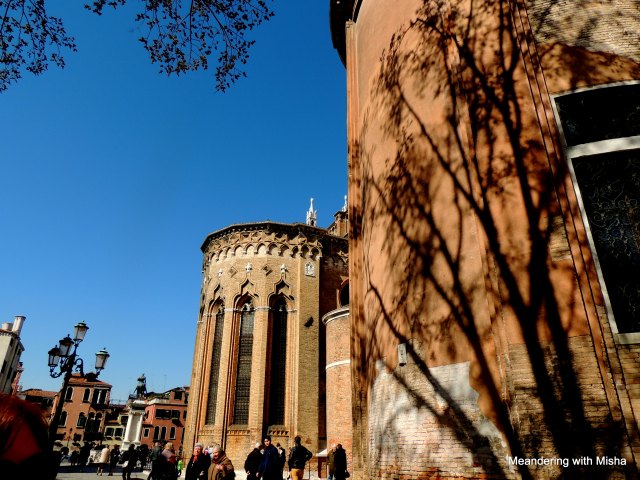 We sat there and talked for a long time. I’ve decided we must have been sisters in a previous life. Then decided to look for lunch. We decided to nix the first place we looked at due to the prominently placed “menu turistico” or tourist menu. Can you spell “tourist trap”? On to one that wasn’t being so obvious Ristorante al Cavallo and no, horse was not on the menu. We both chose pasta dishes, she the one with squid ink. Mine, less adventurous. We shared a bottle of water. With the coperto my share was E 17. The food was surprisingly good for the price and the prime tourist location. It’s always good to go in with few expectations.

By then I was getting really tired and needed to find a vaporetto home. She was so understanding of my physical limitations. We looked at my map and the closest stop was Ospedale….on the lagoon side of the hospital. We headed in that direction taking pictures along the way.

This is a squero…where gondolas are born. I had seen the one at San Tomas but this was new to me. 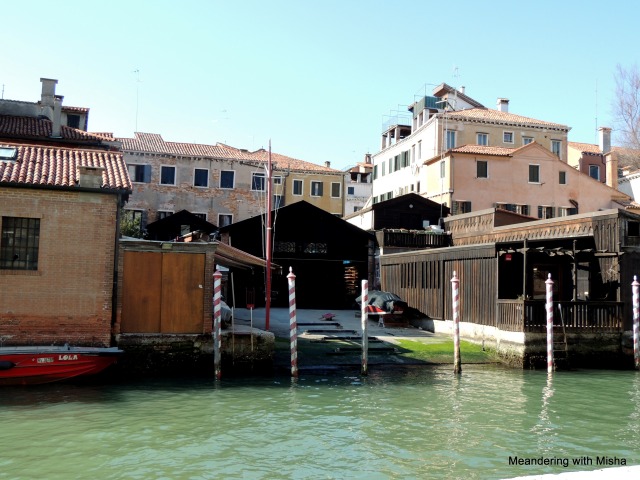 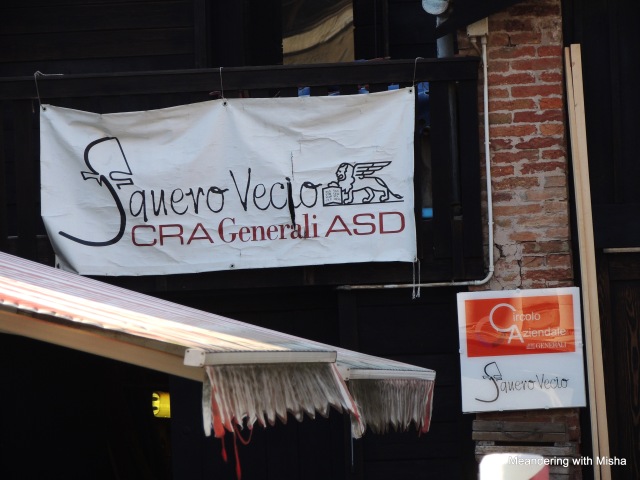 Someone enjoying the view from the bridge…we were headed in the other direction. 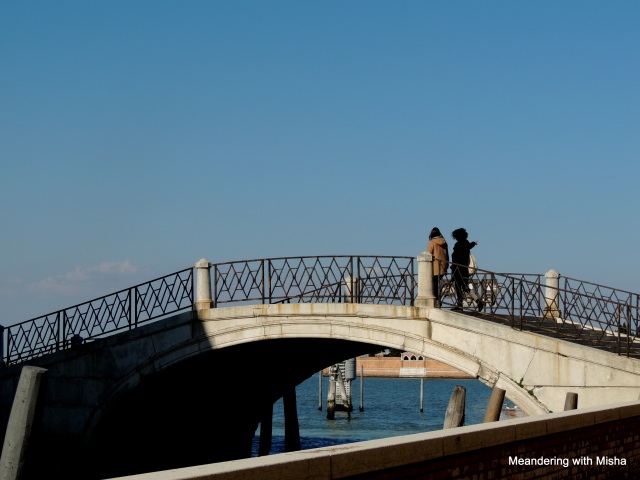 If you have an emergency the ambulance boat will bring you here. 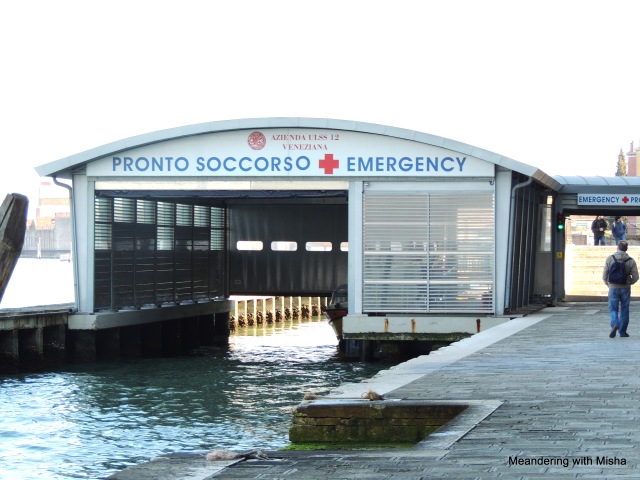 And now for my other chance encounter. My friend decided that she wanted to continue walking so I settled in to wait for the vaporetto. The 4.2 could take me from there all the way to Sacca Fisola. As I was waiting this man came and sat beside me. At first I thought he was talking to himself but I realized he was talking to me and I understood most of what he was saying and he was speaking Italian. I told him, in Italian that my Italian was not very good and he smiled and said “That’s okay it can’t be worse than my English”. He was born in Venice but his family had to go to Switzerland for work so he said he often cried when he thought of Venice. After 23 years (note this conversation back and forth is both in Italian and English by both of us) he decided to return to Venice where his family owns an apartment and where it seems he has lived ever since. He told lots of stories about his life. His name is Romano and when I told him my name was Michelle he burst into song and beautifully sang the Beatles’s Michelle to me. Usually I find it annoying when people do that but it was so sweet and the timing was perfect. He told me he had played guitar in an orchestra, that he was a painter and had been a champion swimmer. This was a very long conversation because the vaporetto took a very long time to come. He was impressed with my knowledge of Venetian history and that one of my ancestors was the Doge (Duke) of Venice Pietro Candiano. He decided I was not your usual tourist.

Finally our vaporetto appeared and it was packed with people. We were the last ones on and stood against the railing packed in like sardines. He continued with stories of what we saw as we rode and smiled that I know Venice so well. We got to the Arsenale stop (where I had started out earlier) and he said he was so happy to meet such a special spirit, wished me well and kissed me goodbye, Italian style.

This is my Venetian friend Romano. 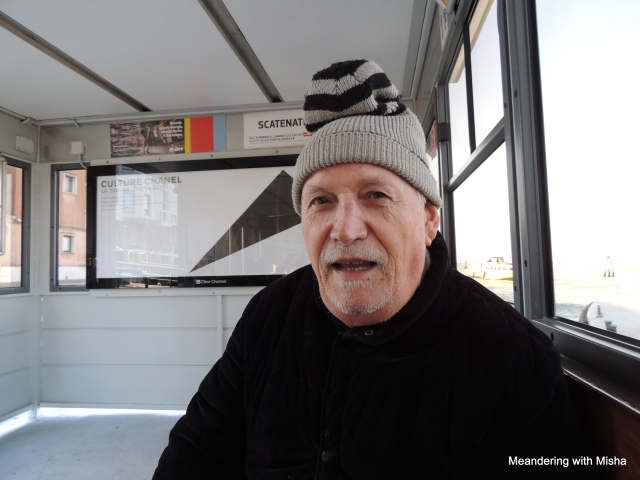 I’m not sure he understood what a blog is and I hope his wife isn’t too upset when she finds my card in his wallet. It was all perfectly innocent and made my day.

I love to travel to Venice (and probably other parts of Italy and beyond) and my camera leads me where she wants without any consideration as to whatever plans I may have. I enjoy photographing nature, my cat and anything that strikes my fancy. I have a "thing" for interesting doors and architectural details.
View all posts by mvaden1948 →
This entry was posted in Beautiful Day, Bridges, Cappuccino, Cats, Church bells, City of My Dreams, Cruise, dogs, fotografia, friends, Gardens, Italian Lesson, Laundry, Life is good, Memories, Moon, Photography, Rowing, Travel, Venezia, Venice and tagged fotografia, Friends, Italy, photography, Solo Travel, Venezia, Venice. Bookmark the permalink.