Yes, that does say “a sweet afternoon with the cable guy”. And for a certain percentage of you (you know who you are) it’s not what you think. And the pictures are only for entertainment and have nothing to do with the post.

The view from my toes if I was in Maui. And if my toes looked that cute (neuropathy isn’t cute).

As most of you know I’m fairly housebound dealing with my cancer battle. Although recent good news on my pet scan showing that the treatment is doing its job and the metastasis in my hip is no growing and there is no new cancer was exciting still not being able to walk properly and being very fatigued a lot of the time means I spend a lot of time with my friend the TV when I’m not spending the rest of the time with my other friend Ms. Nook. Both of those friends are very amenable to a cat in the lap. Although I only have limited basic …the cheapest cable plan you can get I do have “On Demand” and access to PBS and TCM (Turner Classic Movies) plus the CBC from Canada. Most channels I have access to have some of their programming available on demand. I also have a smart DVD player with internet access and watch some You Tube on the TV. Thanks to my dear friend Yvonne, Saturday I watched a wonderful documentary on Herculaneum, the city of Hercules.  Okay, I’m getting to the sweet afternoon with the cable guy. 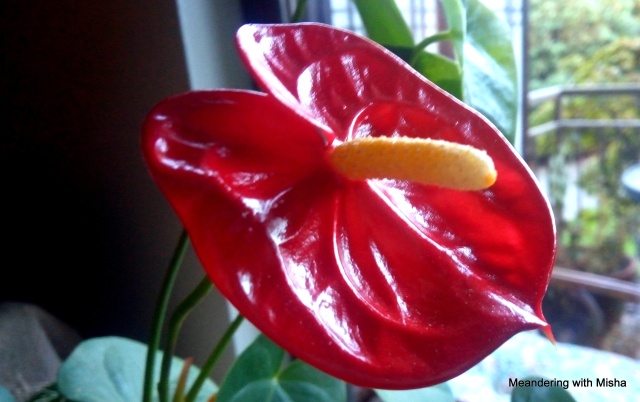 The flower above actually is in my living room but there are a lot more of them in Maui.

Several weeks ago the picture on my 32″ HD TV began pixelating. That’s where the picture goes wonky for lack of a better word. It lasts a few seconds then back to normal. At first I was thinking/hoping it was the cable but it was only doing it on a few channels so I waited. Then it started affecting the sound. I could deal with a scrambled picture for a few seconds but I couldn’t do without the sound. And it was happening on more channels.

I began a search at BestBuy.com for a new TV with my other friend, the PC (no cat in lap for this). I had just completed my income tax return and although I wasn’t due a refund I only had to pay less than half of the money I had set aside for taxes due to a little windfall last year that happened to be taxable income. I had money for a treat.  When it comes to electronics I try to be frugal so I was on a search for what I could get for under $200. In other words….whatever the stores have on sale for $199.99 or less. The last time I did this search was six years ago and there were tons. Not so this time. Oh, there were lots of inexpensive TV’s but they were larger, or SMART(and if you believe that I have some property for sale in Florida guaranteed gator free). I live in a fairly small apartment so one of those wall sized monstrosities won’t fit. Plus I would have to pay someone to install it. I could get a much smaller TV for very little money but I wasn’t interested in downsizing…I watch movies on this. So, on clearance they had two sets for my price. I put them side by side (you can do that online now) and compared…one was 40″ 1080 p and the other was 35″ 1080 p…and SMART. My DVD player is SMART so I did not need that feature. After sleeping on it for a couple of days and an article on the Canadian news that the coming “Trade war” might cause electronic prices to go sky high I decided an immediate purchase was mandated. I ordered the dumb one (as opposed to the smart one) a week ago yesterday and by Thursday it was here. Too big, bulky and heavy for me to lift. The UPS guy very nicely brought it into the living room and sat it near the old TV. There was no way I was going to be able to install it myself and since both of the men I would call to help in a situation like this were on vacation it would have to wait for their return. Whoever got back first would get the job. 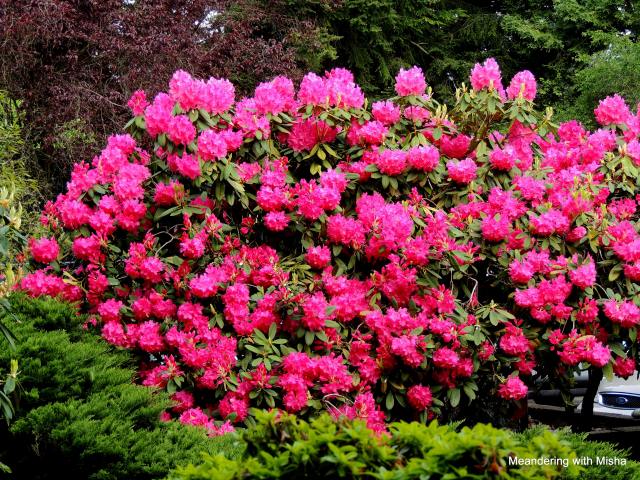 The bush above has not bloomed this year…not enough sun yet. Maybe it won’t bloom at all.

I had managed to endure watching TV with it’s problems on Thursday night but when I went to turn it off it would not turn off. It wasn’t the batteries in the remote because it worked on the TV just fine. When I limped over to check the connections I discovered that the little “power pack” attached to the cable box was very, very hot. If it had been a Samsung 7 I would have thrown it into the yard. Instead I unplugged it. Friday morning I  got out my HD antenna and was able to watch Good Morning America during breakfast, got dressed and then called the cable company. It was a bit of a problem when I looked for their phone number. They no longer want you to call and wait on hold. They want you to go online and pick a call back time. I picked 10:15 am…two minutes from the time I did it. The phone rang at 10:15. A very nice man asked me to describe the problem. Luckily he had formerly been a repair tech and when I mention the hot power pack he knew exactly what was wrong. He described to me exactly what I had done to get it to turn off. He said they had an appointment for someone to come out tomorrow…ie Saturday between 2 and 4. I said that was fine. A few minutes later I had a text confirming my appointment.

As many of you who have dealt with repair people know you often have to wait all day and have them not show up at all or not have the right equipment or whatever. And also be somewhat surly because they had to be there at all. I’ve had many of those in the past. Not so on Saturday. That morning I had a text reminding me of the appointment for later that day. About 1:30 another text told me the technician was on the way. At 2 pm on the nose my doorbell rang. We chatted and I told him what had happened. He said the hot power pack was really the key that told them what was wrong and they just needed to replace the box and make sure it had the right power pack.

Paul, the cable guy, was very nice and of course with one look at me he could tell by my limited walking and my death grip on the handles of the rollator that I was disabled. He was very friendly and asked me how I was doing as his mother had cancer a couple of years ago. I no longer get offended when men refer to me and their mother in the same paragraph. So he said he knew some of what I was going through. He kept telling me how wonderful it was to meet someone in my situation who was so upbeat and outgoing. Of course he asked about my photographs of Venice on the wall. When he finished getting the cable box out of the package he offered to set up the new TV. I said, no I really didn’t want to pay the cable company to install the TV (I’m used to their bills for things I never asked for) and his exact words were “No way, this is our fault for giving you the wrong power pack. You won’t be charged a penny for this.” Wow! Okay, but that’s not the sweet part. As he unwrapped the TV and I once again realized although I might have tried I would not have been able to install it myself we continued to chat about all kinds of things. In the approximately 15 minutes it took him to install the TV, put the old one in an area where I wouldn’t trip over it and offer to take the cardboard to recycling we were great friends.

He had been so sweet and nice about everything that he had made my day. And then he told me that he wished he had more time to talk with me. He said he hadn’t been having very many good days lately and that my positive attitude with all of my issues really made his day and that Saturday afternoon was the best day he’d had in a long time. And that, dear friends, made my “dolce pomeriggio”.

I love to travel to Venice (and probably other parts of Italy and beyond) and my camera leads me where she wants without any consideration as to whatever plans I may have. I enjoy photographing nature, my cat and anything that strikes my fancy. I have a "thing" for interesting doors and architectural details.
View all posts by mvaden1948 →
This entry was posted in Cable Guy, Cancer, Cappuccino, Cats, Chemo, flowers, fotografia, friends, Hawaii, Home, Life is good, me, TV and tagged Books, Cancer, Friends. Bookmark the permalink.