Buona notte….good night in Italian.  I had decided to try to get some nice sunset pictures and maybe a “cruise” on the Grand Canal. I headed to the Zattere. I will now give you a link to some information about this Venetian promenade. It’s not Wikipedia but a little more interesting.

I don’t have the right kind of lens to get the entire Zattere in the picture. This will have to do. 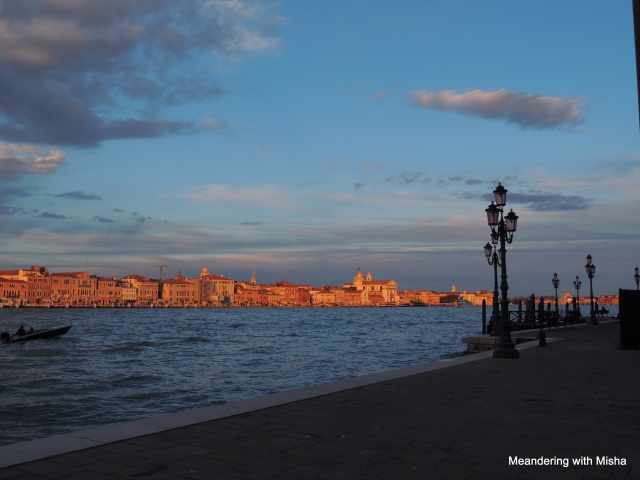 In my short crossing I had a delightful conversation with a small native Venetian. She singled me out and started chattering away. I explained in Italian that I didn’t speak much Italian and asked if she spoke English. She replied “Si, certo, I speak English”. And we continued with her answering my halting Italian questions in English. I asked “Quanti anni hai?” (How old are you?) and she held up her fingers. I said “è cinque?” (five) and then…”ah, no, quattro” (four). Fat little fingers make it hard to tell. Yes, four years old. Too soon it was my stop. Her mama was sitting by us and was thoroughly entertained by her precocious daughter.

Sunset from the Zattere. 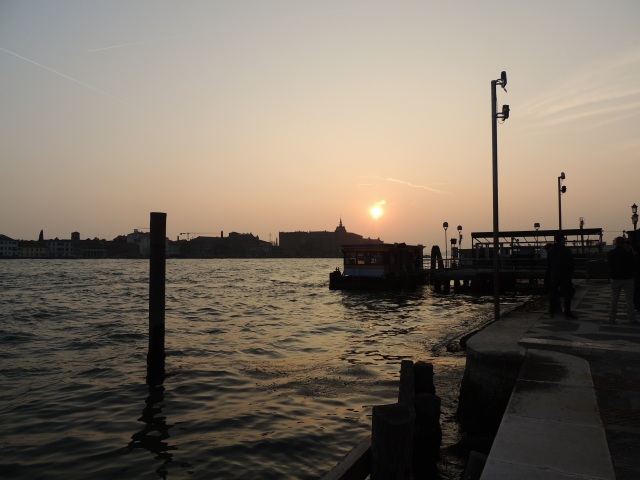 Lots of dogs participate in the passagiata (evening stroll). This one seems to be saying….is it time to move on… 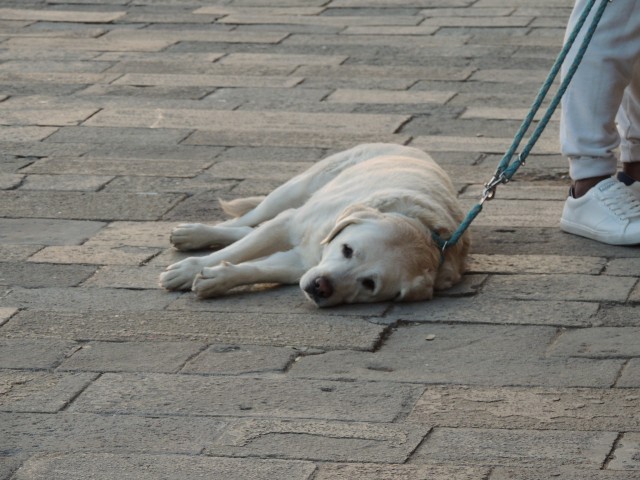 People scurrying across the Accademia Bridge….everyone in a hurry.

Since I was right there at the Bar Foscarini I decided to treat myself to another cioccolata calda. Sadly it paled in comparison  to the one at La Calcina. This one was more expensive at E 6 and so obviously from a boxed mix. Yes, that’s me in the mirror taking the picture.

I headed to the vaporetto for my cruise. This is taken from the floating platform where you wait after passing your card in front of the machine to validate your passage. Soon I will take a picture of the validation machine so you understand what I’m talking about. Board without validating and you face a hefty fine if caught. Ignorance of the rule is no excuse.

Now you know why it’s called the “Blue hour”. 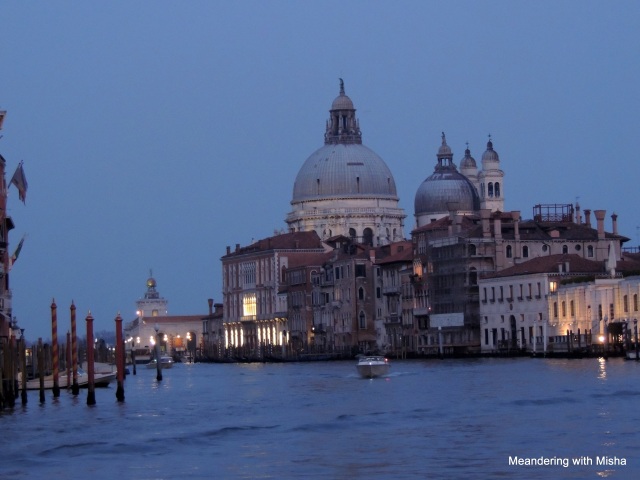 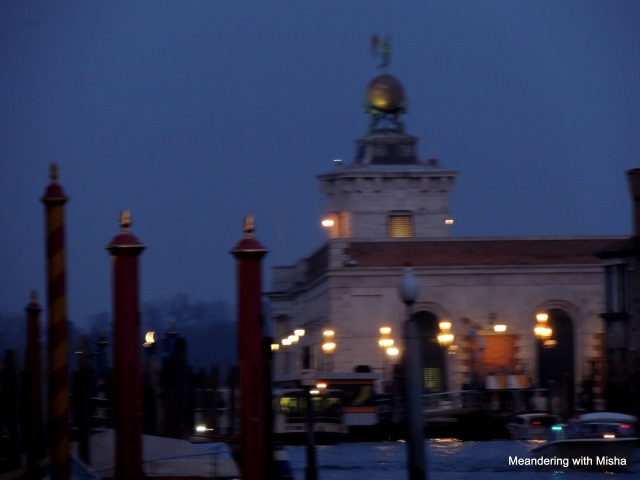 I boarded a very crowded No. 1 because this late in the day the No. 2 (which would take me all the way to Sacca Fisola) stopped this route in the afternoon. I had to change at Rialto (not Rialto Mercato on the other side of the canal). It was standing room only and I could not risk trying to take pictures. At Rialto I found where to get the No. 2. They have a variety of stops there and only certain boats make certain stops. I found my way to “C”. It was my first experience of something I had read about. There is a new system that separates the waiting area into “locals” and “all other passengers”. I discovered that although my iMob card grants me the right to get tickets and passes at the local rate…I paid E37 for my pass that allows unlimited use for the month….it does not allow me to open the gate to the local waiting area. But when the vaporetto came he opened both gates at the same time  and it was a mad rush to board. It was the first time in all my visits that I felt like I might be knocked over. I wasn’t and I had spied some outside seats on the other side. A family had taken over but two little girls were hogging three seats. I asked if I could sit with them and a lovely young woman sitting next to me stood up and gave me her seat instead. So here are a few night pictures on the Grand Canal. 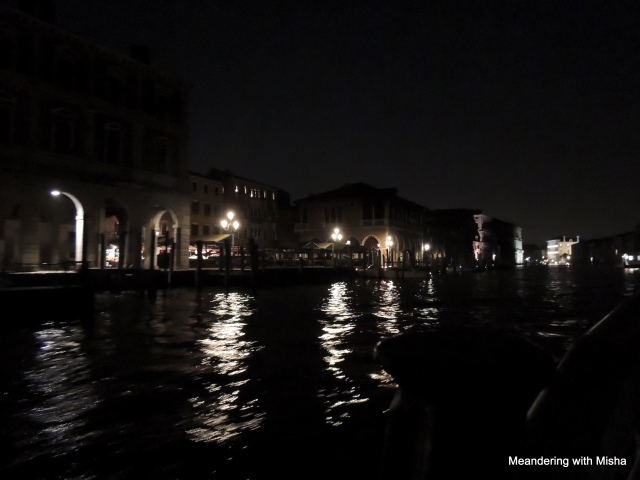 With the right timing you can actually see the beautiful Murano glass chandeliers in some of the palazzos that you can’t see during the day. Sorry, I’ll have to try harder another night. 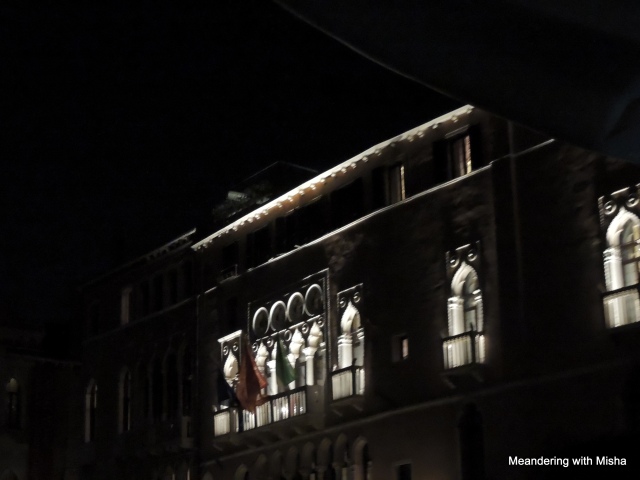 At the Ferrovia (train station) stop everyone seemed to get off.

Yes, really, they all got off except the couple behind me. The workers came and helped me past them as the woman was having a medical emergency and the ambulance had been called. The boat was stopped and I would have to get the next one that came. Not long after I stepped off the ambulance came speeding down the canal, tied up to the far side of the vaporetto and gently loaded this lady into a type of reclining chair and transferred her to the ambulance boat and took off. I pray that she will be fine.  The crew untied the vaporetto and left. I’m sure they had to go back to their base and file an incident report.

Another No. 2 came and there was plenty of outside seating but nothing much beyond that point for photographs. Nearly everyone else got off at Piazzale Roma…probably to catch their buses to the mainland where many of the people who work in Venice live. I was glad to have put my gloves in my bag and put them on for the short trip on to Sacca Fisola and the walk to my Venetian home. Oh, I made it without having to stop on a bench and rest. I just put one foot in front of the other telling myself that it really wasn’t that far and 400 meters is nothing. Drat the neuropathy.

I love to travel to Venice (and probably other parts of Italy and beyond) and my camera leads me where she wants without any consideration as to whatever plans I may have. I enjoy photographing nature, my cat and anything that strikes my fancy. I have a "thing" for interesting doors and architectural details.
View all posts by mvaden1948 →
This entry was posted in Bridges, Chocolate, City of My Dreams, Cruise, dogs, fotografia, Giudecca, Italian Lesson, learning Italian, Palazzo, Photography, Travel, Venezia, Venice and tagged fotografia, night photography, Solo Travel, Travel, Venezia, Venice. Bookmark the permalink.