Sitting in the sun and paying too much for cappuccino….again

March 30, 2017 is an anniversary for me. It is exactly one year since I began chemotherapy to treat a recurrence of pelvic cancer. The day does need a special commemoration and it began with “brunch” at Grancaffè Quadri in Piazza San Marco. You may remember that I spent some time and too much for cappuccino at this same cafè back in December 2013. The prices have gone up since then. 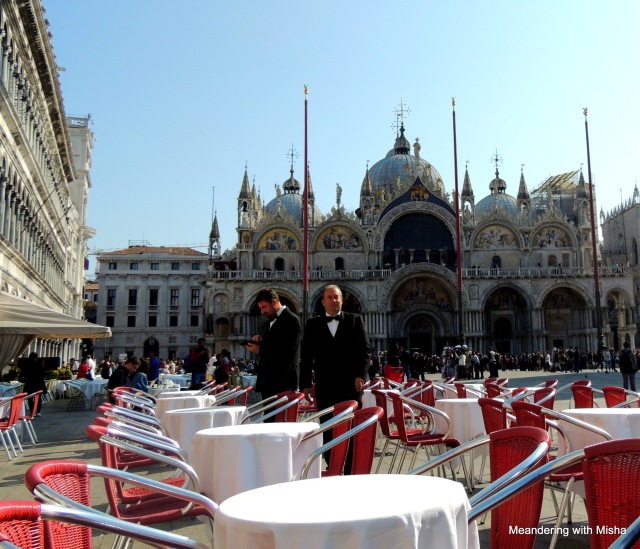 We were lucky the orchestra at Quadri was not playing. So no extra cover charge. Cappuccino, a croissant with pistachio cream and a bottle of passion fruit nectar (imported from France). 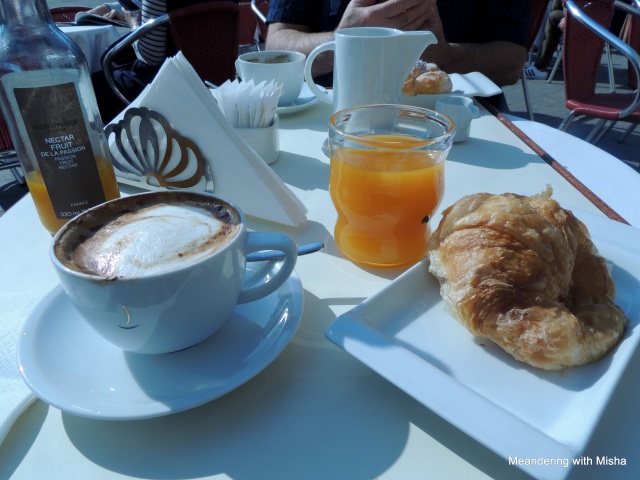 Max prefers his coffee not quite so strong and has an Americano (espresso served with water so he can dilute it as much or as little as he likes) and a croissant with apricot jam.

Our waiter may be concerned that it’s a sunny day and 11 am and they aren’t very busy. 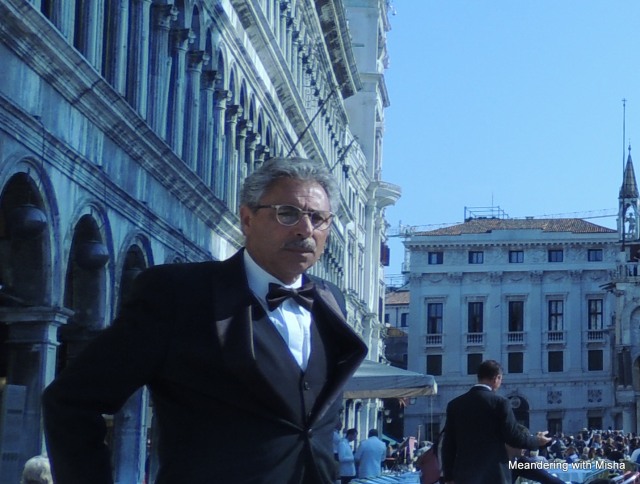 Our orchestra was not playing but the one at the cafe next door was and they played my favorite opera aria “Il mio babbino caro” by Puccini. 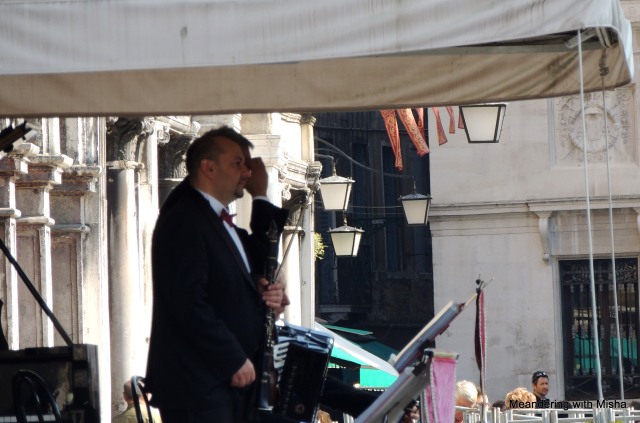 My hair is even redder in the sun.

Max had scheduled a guided tour of the Basilica. I chose not to go because I tend not to like most tours and knew I wouldn’t be able to keep up anyway. So wandered towards  the other end of the Piazza. I found the Olivetti Museum. Yes, a museum dedicated to typewriters. I knew there were stairs so chose not to go in. Maybe next visit because I’ve read it’s not just the typewriters on display  but the architecture. 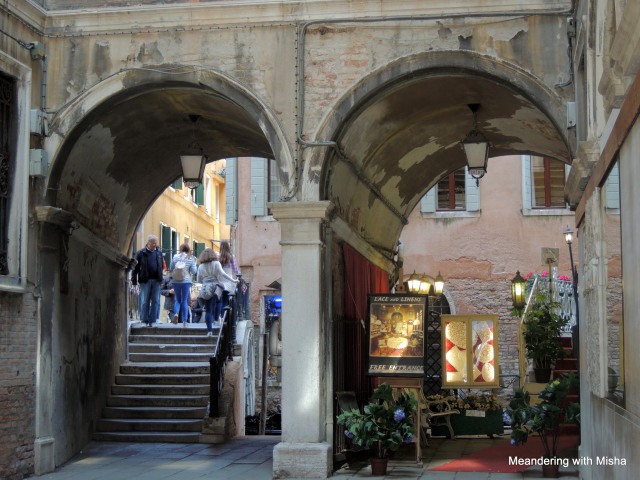 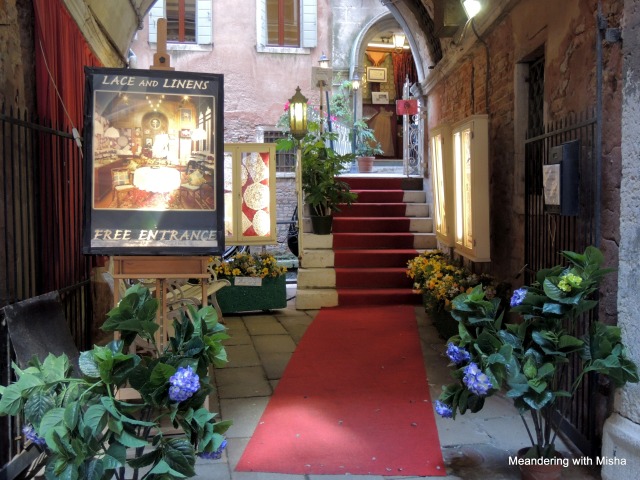 Florian’s orchestra was playing “Fly Me to the Moon” when I strolled by.

And in the Piazzetta they were playing “The Girl from Ipanema”

The poor lion of San Marco gets no respect from the birds.

The gate to the Giardinetti on my way to the vaporetto to Accademia.

I realized that I haven’t shown a good picture of a vaporetto. This is one of the boats that are water buses, the public transportation in Venice. They have other styles but this one is the easiest for me to board and many of them have outside seating. That’s the back end closest to you. 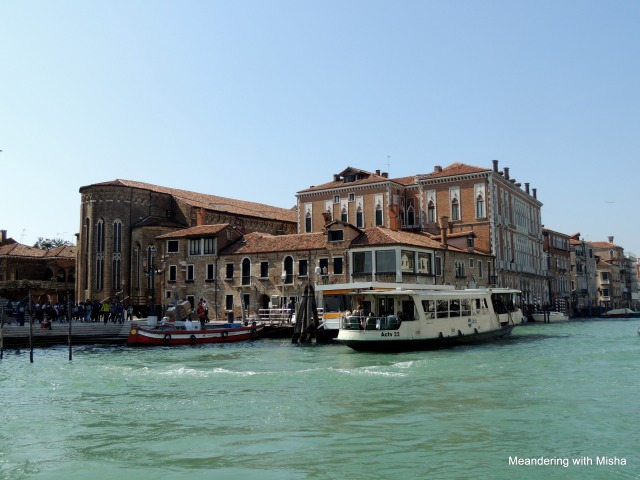 The view of Peggy’s place from the Grand Canal.

Mosaics on a palazzo. 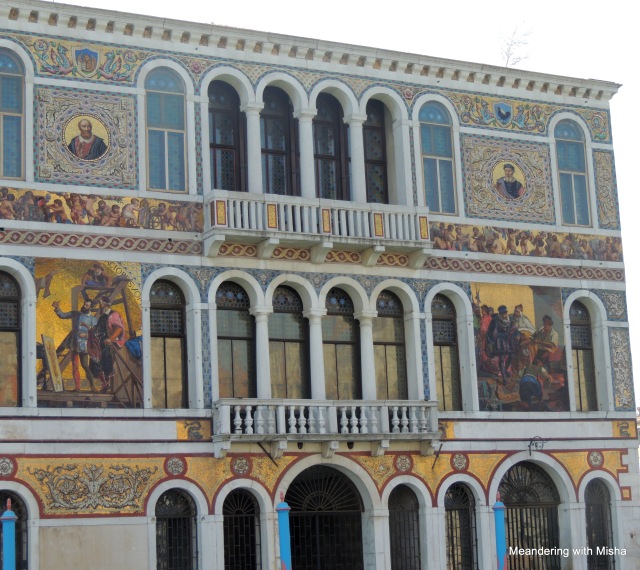 And spring has definitely arrived as I make the walk from Sacca Fisola to my apartment. 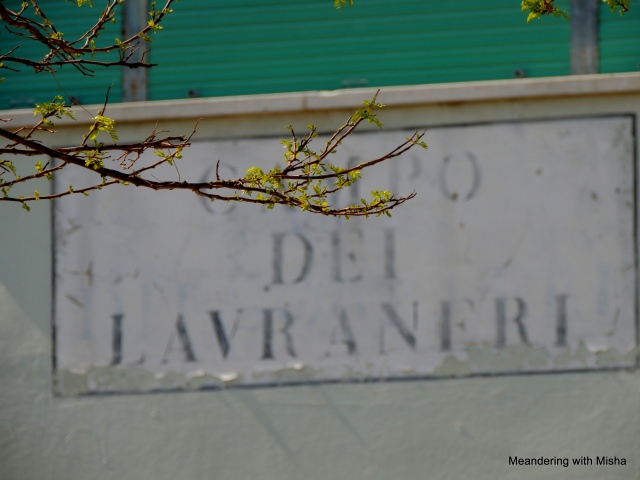 This is the courtyard where the lovely tortoiseshell cat lives. I haven’t seen her again but she has a lovely home, if you look closely you can see the house they have made for her against the back wall in the second picture. 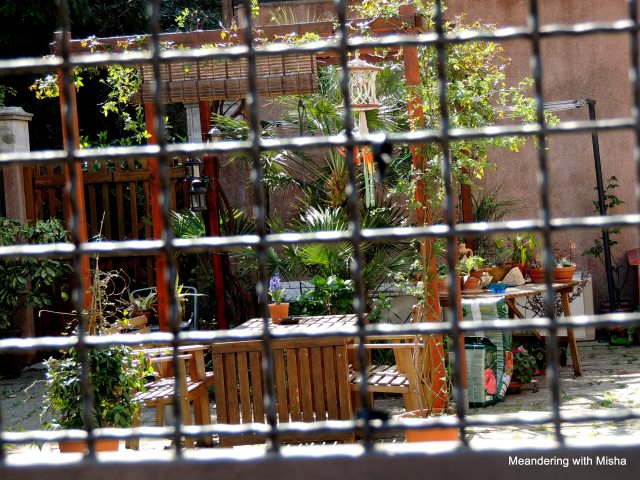 Since you have seen the post about Trattoria Da Jonny you know how we spent the evening. March 31 will be my last full day in my beloved Venezia. I do have housekeeping and packing to do and that is how I will spend my day on Friday. But dinner at La Calcina awaits.

I love to travel to Venice (and probably other parts of Italy and beyond) and my camera leads me where she wants without any consideration as to whatever plans I may have. I enjoy photographing nature, my cat and anything that strikes my fancy. I have a "thing" for interesting doors and architectural details.
View all posts by mvaden1948 →
This entry was posted in Beautiful Day, Birds, Bridges, Cancer, Cappuccino, Cats, Chemo, City of My Dreams, food, fotografia, friends, me, Palazzo, Photography, Travel, Venezia, Venice and tagged food, fotografia, Friends, photography, Travel, Venezia, Venice. Bookmark the permalink.

12 Responses to Sitting in the sun and paying too much for cappuccino….again