What a surprise! Snow in the Seattle area on New Year’s Day hasn’t happened since 1950 according to the news reports. It wasn’t till I turned on the news about 4 pm that I learned that a freak conversion zone had happened over Normandy Park and SeaTac Airport where I live (NP….not the airport although today some people feel like they live there) causing all kinds of trouble. I wasn’t going anywhere so I just enjoyed the view. We did have a brief (about an hour and a half) power outage but it’s back and I’m probably safe putting that chicken breast in the oven. But I have to go around resetting a lot of clocks (microwave, coffee maker etc). It wasn’t till 4 pm and the news reports that I discovered we had actually gotten the worst of it. Lots of flights cancelled out of Seattle which of course snarls traffic elsewhere. I received a text that my loosely adopted son was delayed coming home from NOLA (for those who don’t know that is what the tourism people for the city call New Orleans, Louisiana). He said by the time the get home it will be tomorrow. They just live a few blocks from me.

I thought I’d share a few of the pics with you since this was so unusual. 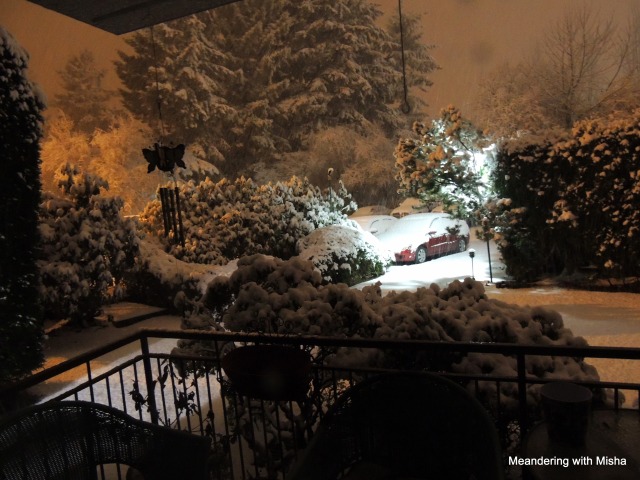 The one above was taken at 4:05 am when I had gotten up to make my usual trip to the facilities and wondered why the light coming through the blinds was so bright. I should remember that is what snow does. There was a good two inches on the ground and still snowing. To those of you who live in snow country that isn’t much. Here it is a lot and really snarls things up.

This and the ones following were taken when I got up for real…after Diavolo had his breakfast and went out to play.

Yes, I had my doctor’s appointments this week and there is some progress. It looks like what showed as a golf ball sized tumor on the MRI the week before is actually the remnants of the dead as in now benign tumor that the chemo and pelvic radiation zapped. The PET scan showed that there is an active “tumor” for lack of a better word in the bone of my left hip that is probably what is causing all the pain. Dr. M (radiation oncologist) is confident it can be eliminated by something called “Cyberknife” which is not surgery but a kind of specialized radiation. I have a consult appointment with them on Tuesday morning (pray for no black ice on the roads to downtown Seattle). I saw the Urologist Dr. F this last Tuesday and he agrees I need a stent to keep the ureter between my bladder and left kidney from collapsing and I’m scheduled for that procedure on January 11. PET scan was on Wednesday and then I saw Dr. M on Thursday for results.  My friend C. took me to run errands on Friday and I was so exhausted and spent so much time on my feet that I could not accomplish everything so Trader Joe’s and their goodies (and the gift card I got for Christmas will have to wait). I find that currently if I have to stand for more than five minutes or walk more than a few feet the pain meds lose their effectiveness and I just want to go home and curl up in a ball. Dr. M. assures me that when we get rid of that spot in the hip bone this will go away and that I will indeed be ready for Venice in March. I probably won’t have the activity level I had on my trip in 2013 but I have my choice, cancel the trip and lose a lot of money and stay home and be miserable or go to Venice prepared for a less active time….after all, I’m there a month, I can take my time, and spend a lot of time relaxing in cafes drinking cappuccino, visiting with friends and enjoying what I find to be the very healing atmosphere of the city of my dreams.

In November I received a little sign that everything would be okay eventually. The same sign that Noah had: 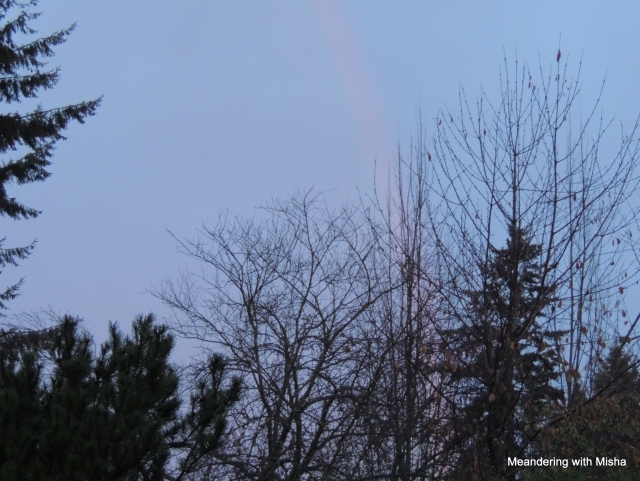 I love to travel to Venice (and probably other parts of Italy and beyond) and my camera leads me where she wants without any consideration as to whatever plans I may have. I enjoy photographing nature, my cat and anything that strikes my fancy. I have a "thing" for interesting doors and architectural details.
View all posts by mvaden1948 →
This entry was posted in Uncategorized. Bookmark the permalink.