Today was another beautiful blue sky day. I was out meandering for a while, trying to avoid the crowds on that main route between the train station and San Marco. But since I had some shopping I thought I needed to do I dealt with it…for a bit. Okay, there is my only complaint for today. Really, just that one. And the beautiful weather and spending time with friends made up for any minor inconveniences. And I hear you…I know, I should be here for summer. But it does seem after a fairly quiet month everyone came for New Year’s Eve in Venice. No, I am not going near San Marco in about an hour. I’ll be out on the Riva near the Arsenale vaporetto stop.
But first some pictures from earlier today.

Headed back to base. 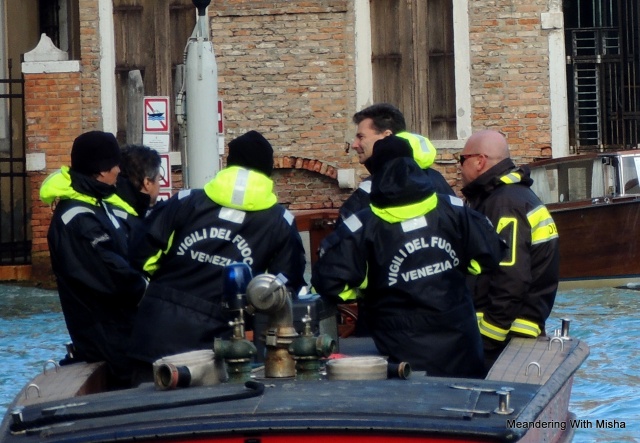 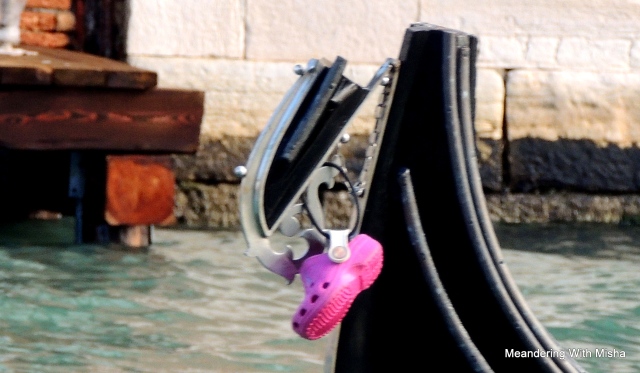 Yes, that is an ambulance and let’s hope it is not an emergency as he was going very slowly along the Grand Canal. 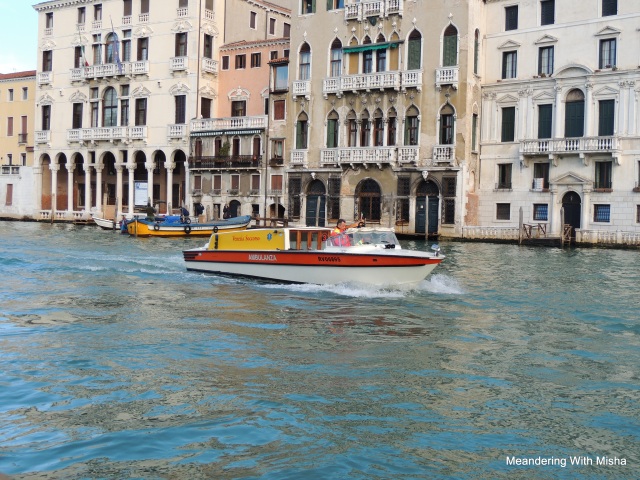 That almost looks like smoke coming out of the chimney…but it is merely a cloud disipating.

The delicate color variations in the marble amaze me. 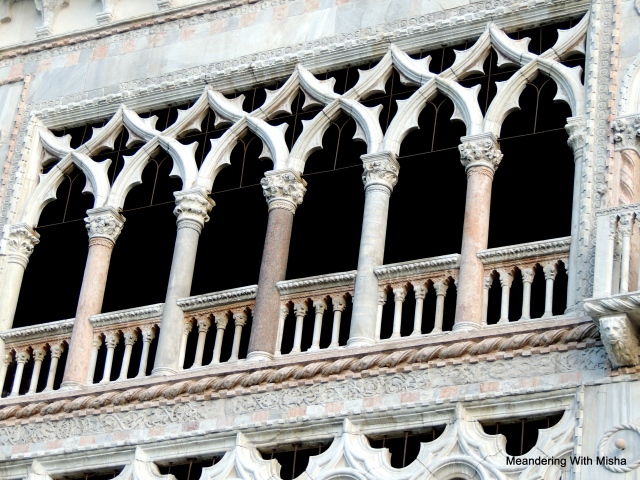 Yes, the water was up…a bit.

In an earlier post I had mentioned the garbage being picked up from your door by people with carts and taken to the “garbage boat” ….these green boats are the garbage boats. 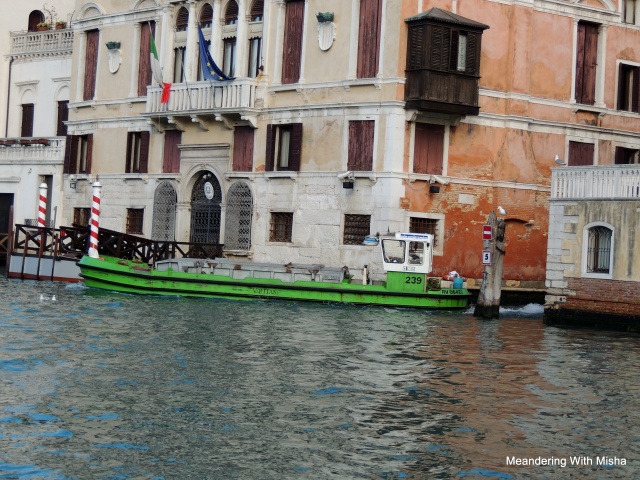 And it even has a guard dog.

And there he goes to make sure everything is clear ahead.

Another sentry on duty.

You are not getting in here without my permission.

Look at the bridge and see all the people.

Just step off the bridge to the right on the near side and….no one…of course that fondamenta doesn’t go anywhere a tourist would probably know to go but…just the same…no one there…not even to take a picture…except me. 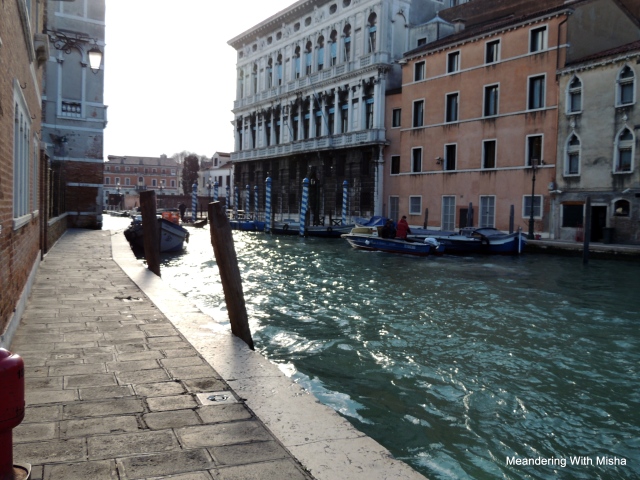 And since I can spend more time walking around this trip I ventured down this calle near San Marcuola and I found another area of potential long term apartments for me. Of course considering how charming it is, probably out of my very low price range. 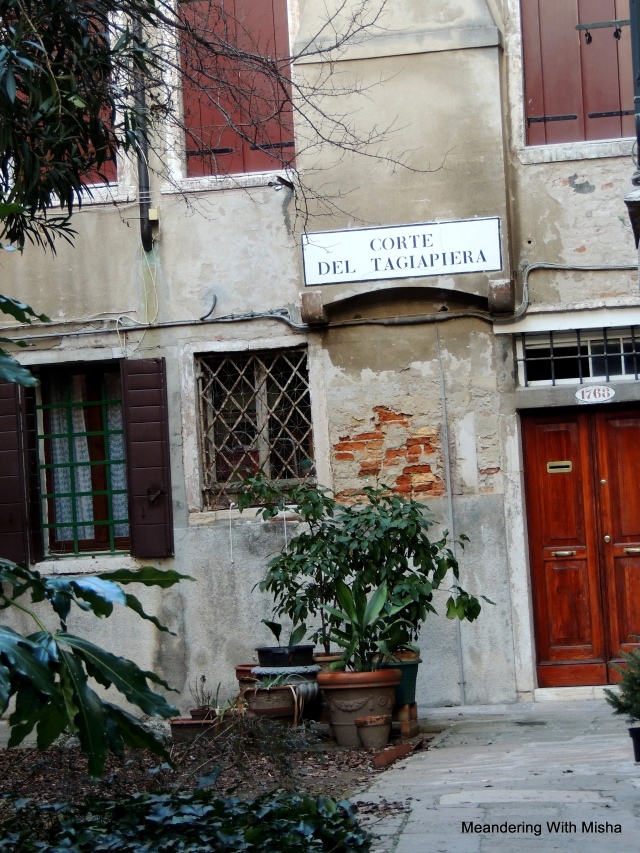 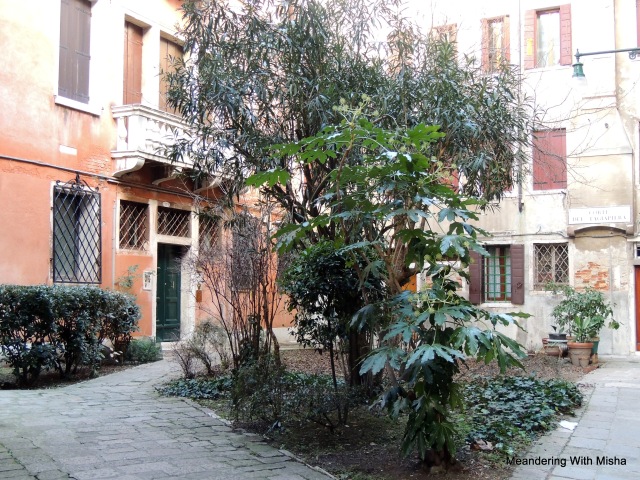 Could that be my balcony some day?

Waiting for the vaporetto.

And I meandered back home to spend a leisurely afternoon, meeting Karen for tea and cappuccino and then finishing preparations for dinner with Yvonne.
The table is set.

Yvonne and I had a good visit but since she just got here a few days ago she’s still a little jet lagged so she didn’t make it out for the fireworks.
I meandered out to the Riva and got there about 11:50 pm.You could hear the excitement building in San Marco and a lot of people headed that way but in my area it was mostly families out to watch the fireworks. 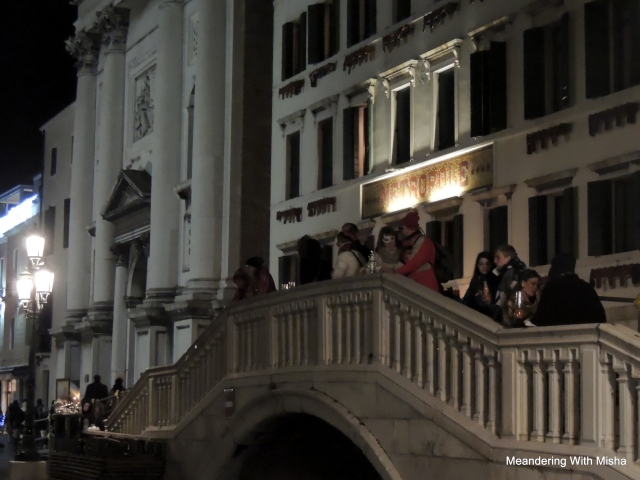 The countdown began, there were cheers, the bells of San Marco rang out…it was the start of a new year.
Small fireworks began to show above San Giorgio Maggiore. 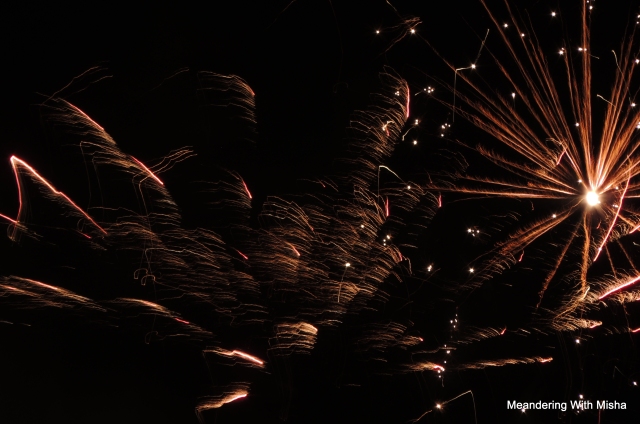 Wasn’t there a Sci-Fi TV show where the aliens looked like giant spiders? 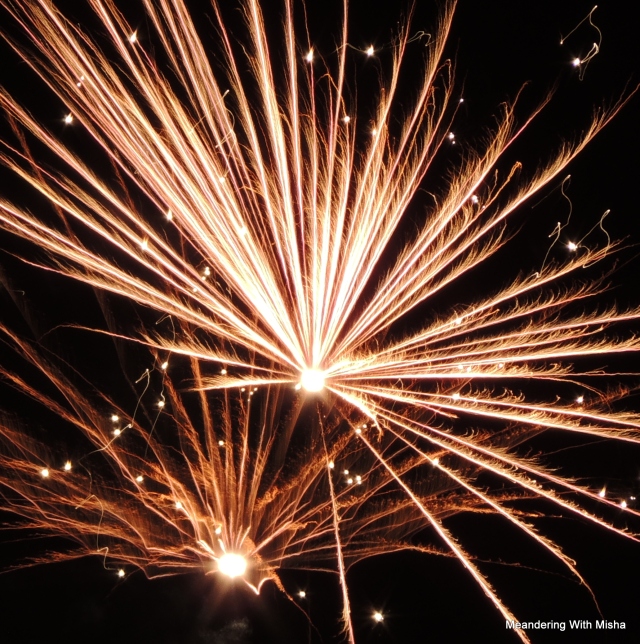 Niente…nothing, and I was fading fast. I am not a night person and the espresso I had at 11 pm had no effect. I waited till about 12:15 and walked home. Just as I got to my door the first bomb went off. Yes, San Marco was under attack….by the main fireworks show. I went up on the bridge here to see if they were high enough that I could get something but no luck. Mi dispiace but I just didn’t have the energy to go back out. I’m sure it was spectacular and that you can find photos on line. It did sound like Venice was under mortar attack. Maybe next time.
Today is my last full day. I depart tomorrow morning. I’m going to meander around a bit today and see what I find.

I love to travel to Venice (and probably other parts of Italy and beyond) and my camera leads me where she wants without any consideration as to whatever plans I may have. I enjoy photographing nature, my cat and anything that strikes my fancy. I have a "thing" for interesting doors and architectural details.
View all posts by mvaden1948 →
This entry was posted in Beautiful Day, City of My Dreams, Photography, Travel, Venice and tagged Beautiful day, City of My Dreams, New Year's Eve, photography, Venice. Bookmark the permalink.