In which the people at Punto again play a role in my life.

Yes, we thought I had made the last post from Venezia, and I have because I am now back in the Seattle area. Very, very tired from lack of sleep but it is the price I am willing to pay.

When I booked the water taxi I had asked them if they could pick me up at Ponti dei Scudi and they said no and sent me this map of where they would pick me up.

The area circled is the far side of the bridge I cross every time I go to Punto so I know exactly where it is. With an empty shopping cart it is four minutes from my apartment. With heavy suitcases it is 15 minutes to allow time for slowly crossing bridges. I was at the appointed place in the map shown above…the circle…at 7:45 am. The Taxi was due at 8am. It was a beautiful if cold morning but I was enjoying watching all the activity of people starting their day and breathing in that last little bit of my beloved city. Several taxis went by. None stopped. Then at 8:10 the garbage boat pulled up and blocked any possibility of a taxi picking me up there. I called the number on my voucher and they said the driver was there but I wasn’t. I explained that I was indeed at the meeting point shown on my map and only the garbage boat was there. I read him the names on all of the signs surrounding me and he said the driver would be right there. He was but he had to back up because…he was at the next bridge down which I could not get to without going back across the one I had just come across, down the fondementa and across another bridge. The man working at the garbage boat had already told me to move because it was dangerous. The driver of the water taxi says can’t you just jump over…as in over the garbage boat. I explained about “dangerous”. And here is where Punto comes in. My taxi driver backed up some more until he was right outside Punto and spoke with the men unloading the supply boat. They took my suitcases and loaded them onto the water taxi which was beside their boat and then they took me by the arms and guided me across their boat, telling me to be careful of the ice on the boat and onto the water taxi. The entire time wishing me well and being very helpful. See why I love Punto. I wished them “arrivederci”(and I’ve learned to spell it correctly) and told them I would be back.

After that I asked the driver if I could sit on the step up near him and he said yes, although I’m sure he thought I was crazy when I could be nice and cozy and warm in the cabin.

And a few of the pictures I took along the way. I didn’t dare look back at the city even if I had been able to twist around in the position I had myself braced into. 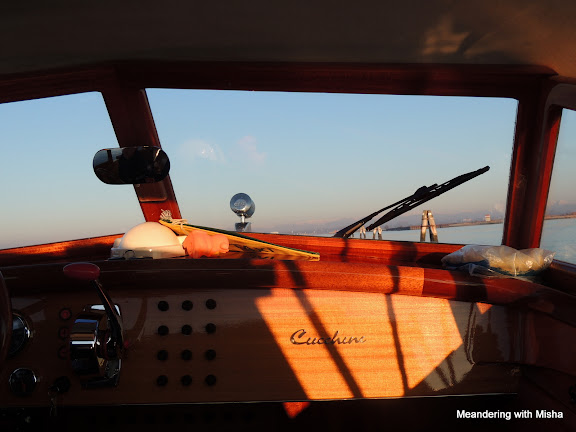 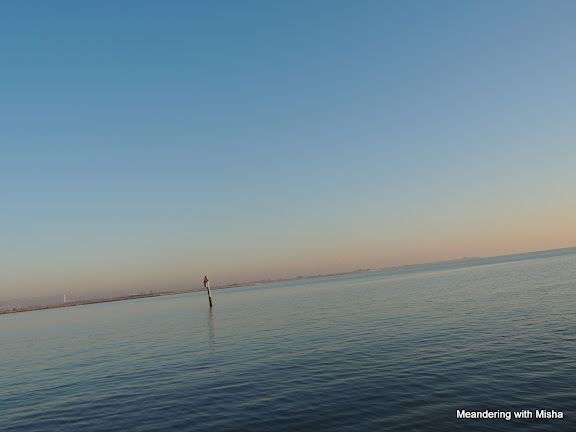 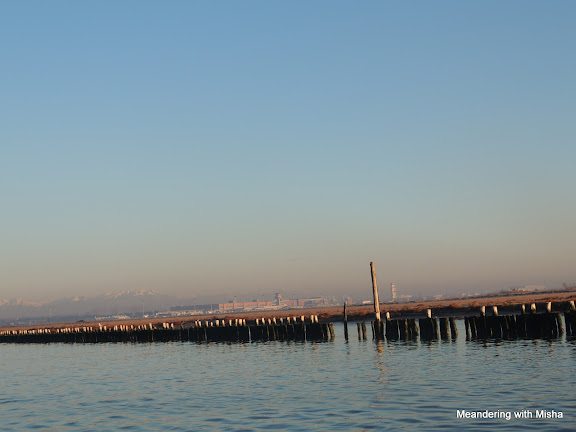 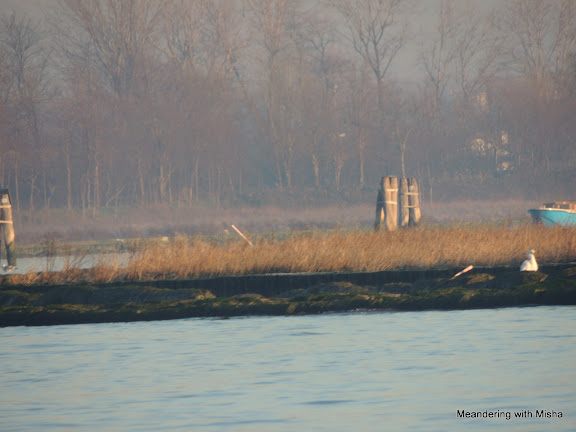 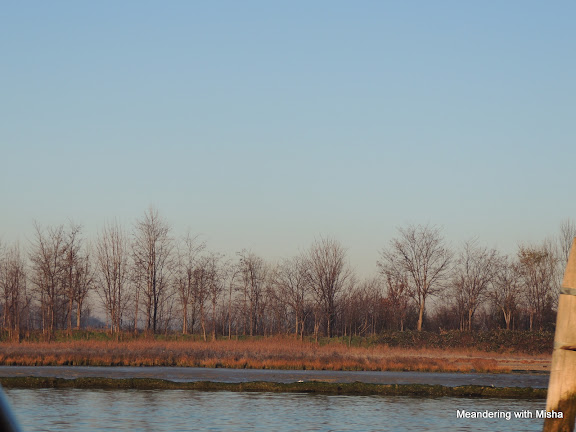 I arrived at Marco Polo Airport to an icy dock to navigate. Luckily the walkway to the terminal was not icy. I had planned to use a porter but they were not to be found on that cold morning. So with the late taxi and a hike I hadn’t planned on I made it to my gate as my plane was boarding. Then we were told we would not take off for another 30 minutes because of something about restricted airspace. They only do that here when the President is flying in. So since I had a really short connection in Paris I was thinking there could be worse places to be stranded but, no by the time I was through immigration ….after all I was leaving the EU they were boarding my flight to Detroit. I was not the last one on the plane buy my seat mate almost missed it because he had fallen asleep at the gate. But we were then delayed by the loading of a disabled passenger who was not happy with his seat. Okay, lots of drama here but I went with the flow. Besides the really nice thing about having Delta code share with Air France…handsome flight attendants with French accents, really decent food and French movies and music. I whiled away my time listening to Jacques Brel and Edith Piaf. I knew I would not be able to concentrate on a movie so didn’t try. Upon arrival in Detroit I learned the flight to Seattle was delayed and would be leaving two hours later than scheduled. At this time my watch already said 2 am Venice time. I am not a night person but I had a very large Cafe Latte so was very wired on caffeine so I would not fall asleep and miss my flight. Note this delay was due to mechanical issues and not weather. It’s raining in Seattle but per the forecast we may just have a white Christmas. I made a couple of phone calls because I had friends who had volunteered to pick me up and told them I would just get a cab….since I live less than five miles from the airport. Which is exactly what I did…finally arriving to the welcoming furry caresses of Lili at 12:35 am. Here she is:

Something I did realize that I had forgotten in being away a month (besides being unable to open the door of my microwave oven because it’s different than the one I used to heat water for tea for the past month)…maybe it’s the jet lag but I was really annoyed at the noise from the power equipment….leaf blowers etc…that people use around here. Okay…it must be the jet lag because I can usually ignore that kind of thing. But I’d much rather be listening to church bells in Venice.

I love to travel to Venice (and probably other parts of Italy and beyond) and my camera leads me where she wants without any consideration as to whatever plans I may have. I enjoy photographing nature, my cat and anything that strikes my fancy. I have a "thing" for interesting doors and architectural details.
View all posts by mvaden1948 →
This entry was posted in Uncategorized. Bookmark the permalink.